Posted by sweety movie Posted on March 20, 2018 with No comments 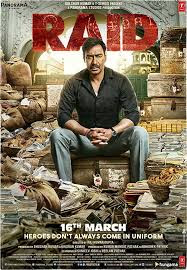 Amay Patnaik, a fearless income tax officer, carries out a raid at the mansion of the most powerful man in Lucknow.
Initial release: 15 March 2018 (Indonesia)
Director: Raj Kumar Gupta
Music director: Amit Trivedi, Tanishk Bagchi
STORY:
An incorruptible IT officer Amay Patnaik (Ajay Devgn) gets an anonymous tip about a political leader Tauji’s (Saurabh Shukla) illegal assets. Patnaik plans an elaborate Raid on Tauji’s home and businesses.
REVIEW:
A good film is it’s own reward. Raj Kumar Gupta has made an entertaining and impressive film with Raid. Ritesh Shah has written an intelligent script and screenplay one that has interesting characters and dialogue too. Raid is an engrossing film, its moulded in the commercial film format. There are songs, there are twists and there’s an abundance of thrills. This one has all the trappings of a film you’d want to root for. As the hero fights corruption with utmost honesty, and his team of officers unearth hidden assets with lively enthusiasm, the viewer feels the thrill of seeing gold biscuits and currency notes pop out from walls and other unlikely sources. The music by Amit Trivedi and Tanishk Bagchi doesn't really fit into the gritty narrative and end up as a distraction from the otherwise taut story. Tracks like 'Sanu Ek Pal' and 'Nit Khair Manga' look like they've been included just to add to the film's commercial prospects.
Ajay Devgn plays Amay Patnaik with characteristic intensity and resolve. He’s the quintessential public servant. His ideals are taller than his lanky frame and his integrity is infallible. With great pride he assumes control of the IT department in Lucknow in the year 1981. Saurabh Shukla plays the chief antagonist Tauji to great effect. He’s the resident baahubali, a man who prides his political power and has enough confidence to mock the hero before the raid begins. He throws him a challenge, that the IT man will not find a single rupee during the search operation. In Raid, the battle takes place between the ideals of one man and the belief of the other. The hero is the voice of justice and righteousness while the villain is on a power trip. Their banter, their clash and their conflict makes for an engrossing watch. But this politically charged film is at times a little too predictable.
Saurabh Shukla’s performance as Tauji is the highlight of the film. He brings in quirks and shades that make his character the most interesting part of the film. Ajay Devgn does what he does best – he keeps the intensity high and delivers his punchy dialogues with effortless ease. Ileana D’Cruz and Amit Sial chip in with good supporting performances as well. 85-year-old Pushpa Joshi as Tauji’s mother is extremely charming.
Director Raj Kumar Gupta handles the film well. The last 10 minutes seem a little fleeting, but that’s a minor grouse. The music by Amit Trivedi and Tanishk Bagchi isn’t consistent either. But Raid is a film that caters to public sentiment against black money and corruption. All in all, this one’s right on the money.
click here to download moive